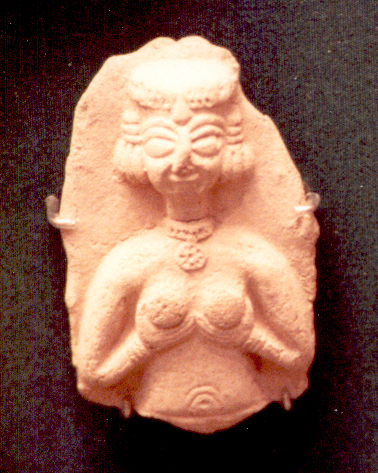 The English word Easter is derived from the names “Eostre” “Easter” “Astarte” or “Ashtaroth”  Astarte was introduced into the Gritish Isles by the Druids and is just another name for Beltis or Ishtar of the Chaldeans and Babylonians.

Easter is just another name for Ashteroth “The Queen of Heaven.” Easter was not considered a “Christian” festival until the fourth century. Early Christians celebrated Passover on the 14th day of the first month and a study of the dates on which Easter is celebrated will reveal that the celebration of Easter is not observed in accordance with the prescribed time for the observance of Passover.

After much debate, the Nicaean council of 325 A.D. decreed that “Easter” should be celebrated on the first Sunday, after the full moon, on or after the vernal equinox. Why was so much debate necessary if “Easter” was a tradition passed down from the Apostles? The answer is that it was not an Apostolic institution, but, an invention of man! They had to make up some rules.

History records that spring festivals in honor of the pagan fertility goddesses and the events associated with them were celebrated at the same time as “Easter”. In the year 399 A.D. the Theodosian Code attempted to remove the pagan connotation from those events and banned their observance.

The pagan festival of Easter originated as the worship of the sun goddess, the Babylonian Queen of Heaven who was later worshiped under many names including Ishtar, Cybele, Idaea Mater (the Great Mother), or Astarte for whom the celebration of Easter is named. Easter is not another name for the Feast of Passover and is not celebrated at the Biblically prescribed time for Passover. This pagan festival was supposedly “Christianized” several hundred years after Christ.
The renowned Oxford English Dictionary informs us that the name Easter is derived from the name of a goddess whose festival was celebrated at the time of the vernal equinox. We are told that she was originally known as the dawn goddess – no doubt the origin of sunrise celebrations at the time of Easter.
According to Venerable Bede, a seventh century Anglo-Saxon theologian, the English word Easter is derived from the name of the pagan fertility goddess Eostra. He tells us that “the heathen Anglo-Saxons called the fourth month “Esturmonath” after their goddess Eostra – another name representing the spring fertility goddesses such as Astarte or Ashtaroth, the goddess who was introduced into the British Isles by the Druids. In all actuality Easter is just another name for Beltis or Ishtar of the ancient Babylonians and can be traced all the way back to Hathor, the cow goddess of Egypt that was associated with the building of the golden calf at Mt. Sinai.
Easter has nothing to do with Jesus and everything to do with pagan abominations condemned by the Bible. We have a powerful adversary that wants us to involve ourselves with the worship of other gods and thereby break the commandments of our Creator. Even King Solomon, whom God had given “exceeding wisdom” was taken in by the worship of the fertility goddess. His wives turned away his heart after other gods and he worshipped Ashtoreth the pagan fertility goddess identical to Easter.
One important consideration that is a direct connection between fertility worship and traditional Christianity is Easter Eggs – eggs being an undeniable symbol of fertility. The art of decorating eggs dates back to the spring rituals of pagan sun worship thousands of years before the time of Christ. The spring fertility goddess, by whatever name, was thought to have turned a bird into a hare: thus the Easter Bunny laying eggs. No, Easter eggs have nothing to do with Jesus and everything to do with the ancient goddesses and their symbols of spring fertility.

So, how did a pagan festival come to be recognized by most as a Christian observance? The 5th century theologian Socrates tells us that “the celebration of the feast of Easter began everywhere more of custom than by any commandment either of Christ or the Apostle.”

Prior to the year 325 A.D. Christians recognized Passover as the time of year at which the Crucifixion and Resurrection of Christ took place. In the year 325 the Council of Nicaea, presided over by the Roman Emperor Constantine changed the date for the observance of Passover from the Biblically prescribed time, to that now recognized as Easter. Prior to the Nicaean Council, Passover was celebrated in the eastern part of the empire on the Biblical prescribed fourteenth day of Nisan, the first month on the Jewish calendar. In Rome however, the celebration was being observed not on the fourteenth day, but on the following Sunday. It was the decision of the Nicaean Council that Passover would be observed on the first Sunday, after the full moon, on or after the vernal equinox. According to Biblical timing Passover could fall on any day of the week. Based on the timing of the Council – man’s timing – Passover would always be observed on Sunday. Because of that, what is now recognized as Easter is often far from the actual time of Passover.

What difference does it make? Theologians are well aware of the pagan nature of Easter. So are modern day Antichrists. Non-Biblical aspects of traditional Christianity are now being legitimately challenged by those who would turn us away from Christ and many are falling for their deception. Those who contend for the faith once delivered to the saints must not stand by and let that happen. We must make it known that Jesus was not crucified and resurrected at the time of Easter. He was crucified at the time of Passover. As the New Testament states: He was “the Lamb that was slain – the Lamb of God that taketh away the sins of the world” – the sinless sacrifice that had been foreshadowed in the Feast of Passover for centuries.