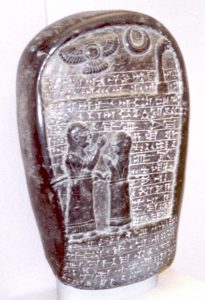 The next civilization was that of Babylonia. They too were sun worshipers. During the Biblical time of the Judges, wars were being fought between the Assyrians and the Babylonians. Merodach-Baladan extended his empire to include upper Babylon and at that time he became known as the “King of Babylon”.

“At that time Merodach-Baladan, the son of Baladan, king of Babylon, sent letters and a present to Hezekiah: for he had heard that he had been sick, and was recovered. And Hezekiah was glad of them, and shewed them the house of his precious things, the silver, and the gold, and the spices, and the precious ointment, and all the house of his armour, and all that was found in his treasures: there was nothing in his house, nor in all his dominion, that Hezekiah shewed them not. Then came Isaiah the prophet unto king Hezekiah, and said unto him, What said these men? and from whence came they unto thee? And Hezekiah said, They are come from a far country unto me, even from Babylon. Then said he, What have they seen in thine house? And Hezekiah answered, All that is in mine house have they seen: there is nothing among my treasures that I have not shewed them. Then said Isaiah to Hezekiah, Hear the word of the LORD of hosts: Behold, the days come, that all that is in thine house, and that which thy fathers have laid up in store until this day, shall be carried to Babylon: nothing shall be left, saith the LORD.”

WHY DID THIS HAPPEN? “…Because they have forsaken my law which I set before them, and have not obeyed my voice, neither walked therein;”

The religious practices of the Babylonians was almost identical to that of the Chaldeans. The same gods were worshiped. This is a very important consideration because it proves that the original sun worship which began in the kingdom of Nimrod was still being practiced in 586 B.C.: at the time Judah was taken into Babylonian captivity.