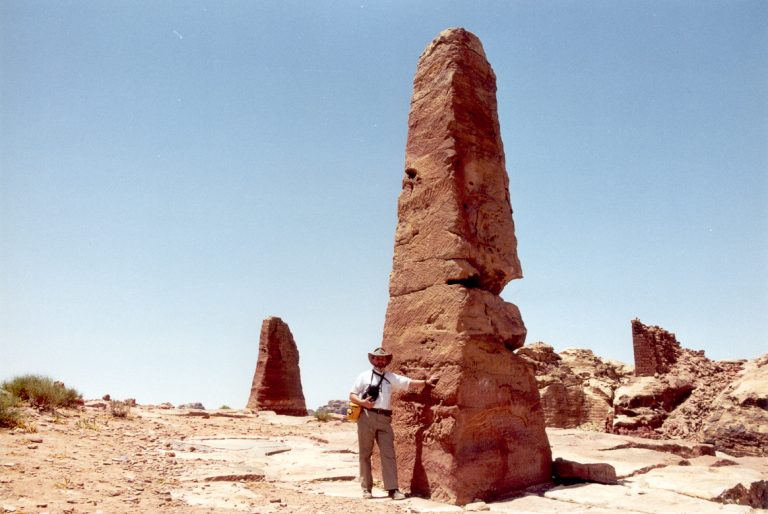 Obelisks carved from stone near the “high place of sacrifice” – Petra, Jordan

What about images? Are they associated with Biblical instruction or have they too been Christianized?

The Egyptians dedicated many obelisks to Ra, the god of the sun. The obelisk shape has been defined as that of a phallic symbol, or a ray of the sun extending to heaven. Today obelisks, or steeples adorn many buildings which have been labeled as churches. Does this honor our Creator?

As surprising as it may seem, the symbol of the cross did not originate at the time of the crucifixion of Christ. It has been a pagan symbol used by sun worshipers since the time of Babel.

The symbol of the cross was used by the ancient mystery religions. It has been identified as being the letter T – the initials of the sun god Tammuz. Remember that, in the book of Ezekiel, the women were “weeping for Tammuz”?

Tertullian, the “church” historian, who lived some one hundred years after Christ, gives us great insight into the use of the cross by the Romans. The Romans, knew that the symbol of the cross was one of pagan origin. They saw the use of it by those calling themselves Christians as proof that what was being called Christianity in Tertullian’s time was no more than re-hashed paganism. In debating with the Romans about the symbol of the cross being only superstition, he states: “……if any of you think we render superstitious adoration to the cross, in that adoration he is sharer with us. We have shown before that your deities are derived from shapes modelled from the cross. In your trophies the cross is the heart of the trophy…….The camp religion of the Romans is all through a worship of the standards, a setting the standards above all gods. Well, …those images decking out the standards are ornaments of crosses. And if my memory still serves me, Mithra there, (in the kingdom of Satan,) sets his marks on the foreheads of his soldiers.”

The sad fact is: The Romans were right. There is no archaeological or historical evidence that first century believers saw the symbol of the cross as one worthy of “adoration”.

Another “image” that has supposedly been “Christianized” is that of the “mother and child”.

We have shown that the worship of the mother and her child, the re-incarnated sun god, has been one of the main components of sun worship since ancient times. The child represented the reborn sun god, proclaimed to be husband of the mother. That enabled her to claim the title “mother of god” – “queen of heaven”.

Please notice the “nimbus” surrounding the heads in many depictions of the “mother and child.” This “nimbus’ or radiant light, in the form of a circle or halo, originated in sun worship. The nimbus was used to indicate the radiance of the sun gods or goddesses.

There were no such depictions of the Biblical Mary and Christ by early believers. Later, however, as paganism began to corrupt the worship of God these representations began to be accepted by those calling themselves Christians. Mary was given the title “Theotokos – Mother of God” and these icons began to be placed on the eastern wall of churches, toward the rising sun, where they had always been in the pagan temples.

The only honest conclusion that can be drawn is that there is no Biblical, archaeological or historical evidence that any of the before mentioned “images” were used by first century believers. Where did these symbols originate?

We will again quote the “church” historian Tertullian – He sums it up nicely from a human standpoint: “If, for these and other such rules, you insist upon having positive Scripture injunction, you will find none. Tradition will be held forth to you as the originator of them, custom as their strengthener, and faith as their observer.”

Jesus sums it up perfectly: “But in vain they do worship me, teaching for doctrines the commandments of men.”