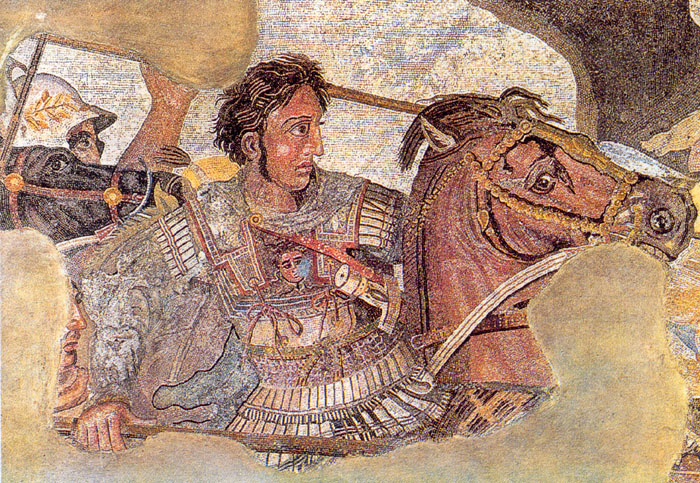 By now, it should be no surprise that the Greco-Roman gods were also sun gods.

Greece or Grecia had very little immediate significance to the writers of the Old Testament. From a prophetic stand point, however, Greece was extremely important.

The prophet Daniel relating a vision he had been given, foretold of the fall of the Medo-Persian empire and the rise of the powerful Grecian empire of Alexander the Great.

“The ram which thou sawest having two horns are the kings of Media and Persia. And the rough goat is the king of Grecia: and the great horn that is between his eyes is the first king.”

At the height of his power, in 323 B.C., Alexander the Great died in Babylon having conquered a vast area stretching from Greece to India, including Egypt and Israel.

Little by little Rome gained dominance over the Grecian Empire. At the death of Caesar Augustus,the time of Christ, the Roman empire stretched from Spain to the Caspian Sea, including Egypt, the Sinai peninsula, and Israel. Christianity was born and grew up in this setting.

Many Roman emperors came to power; commanding adherence to their own versions of paganism. By the year 321 A.D. the faith of the first century believers had almost vanished, and a blend of sun worship and the true worship of God had been substituted…almost, for God has always preserved a faithful remnant.

The most significant aspect of the Greco-Roman civilization to our study of sun worship is that of religion. The Greeks and Romans worshiped numerous gods. Religious festivals were very important and many were celebrated. Notable festivals include the Greek festival of Zeus in 776 B.C. the first “Olympic Games”, December 25, the birthday of the Roman sun god, and the celebrations in honor of the fertility goddess at the spring equinox. These celebrations are still observed today.

When one thinks of the Greek gods, the famous ruins of Mt. Olympus come to mind. Skilled architects and sculptors were employed by the Greeks to create elaborate temples for the gods which are still recognized for their magnificence. The Romans were also known for impressive sculpture representing their gods and goddesses. Again, as in Greece many of the graven images of Rome still remain. It should be noted that some of them have been renamed, concealing their true identity.

As Alexander the Great made conquests, mystery religions came with the territory. The same is true for the Roman Empire. The sun gods and goddesses including Mithra, Phrygian Cybele and the Egyptian Isis, to mention a few, were brought into the empires as annexations were made. And, of course, along with mystery religion came astrology, whose central figure is the sun.

The gods and goddesses of Greece and Rome were none other that re-named Chaldean gods from the time of Nimrod’s kingdom of confusion, – Babel.

“Who are these gods? – No matter what names you give them they are simply the representatives of Satan, the master of deceit. They were known as the “ruler of heaven” and heads of the pantheon.

Let us not forget who it was that sought to ascend into heaven and exalt his throne above the stars of God? “How art thou fallen from heaven, O Lucifer, son of the morning! how art thou cut down to the ground, which didst weaken the nations!”
This segment is excerpted from the book, “Too Long in the Sun”.