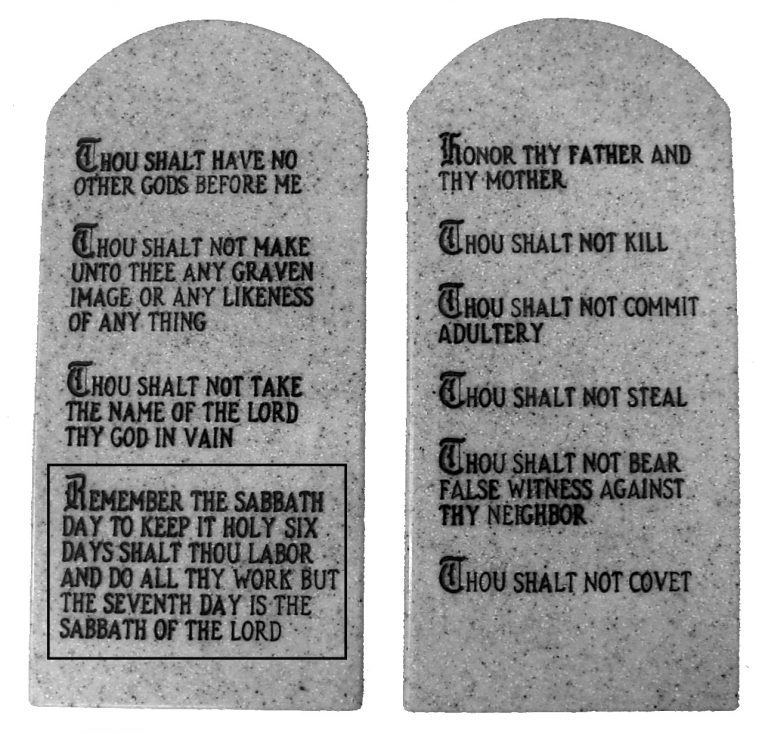 THE FOURTH COMMANDMENT – WRITTEN IN STONE BY THE FINGER OF GOD

We observe that in the book of John, Jesus tells us that in order to bear fruit we must abide in him. He goes on to tell us that the way we abide in him is to keep His commandments. The instruction to keep the sabbath day holy is one of those commandments.

The Sabbath described in Genesis 2 is definitely the seventh day, Saturday, and not the first day, Sunday.

There is no way to avoid this truth.

The fourth commandment was established at the creation of the world and later reconfirmed to Moses in the wilderness by Jesus.

The Sabbath was very important to people of the Bible and even though calendars may have changed, it would be inconceivable for the Sabbath day to have been confused with any other day. Chronologist are in agreement that the order of days is the same today as at the beginning of history. In addition, Jesus recognized the Sabbath and would have certainly known which day He had commanded to be kept holy.

ONE MIGHT ASK: IS THE SABBATH REALLY THAT IMPORTANT?

Is God really serious about the observance of the sabbath day? Numbers 15: 32-40 answers this question without any doubt. “And while the children of Israel were in the wilderness, they found a man that gathered sticks upon the sabbath day, And they that found him gathering sticks brought him unto Moses and Aaron, and unto all the congregation, And they put him in ward, because it was not declared what should be done to him. And the Lord said unto Moses, The man shall be surely put to death: all the congregation shall stone him with stones without the camp. And all the congregation brought him without the camp, and stoned him with stones, and he died; as the Lord commanded Moses.”

We find in Nehemiah Chapter 13, that the people of Jerusalem and Tyre were profaning the Sabbath. Nehemiah contended with the nobles of Judah, and said unto them, “What evil thing is this that ye do, and profane the sabbath day?”

Has something evil become good?

Let us heed the warning of Isaiah:

“Woe unto them that call evil good, and good evil; that put darkness for light, and light for darkness; that put bitter for sweet and sweet for bitter.”

Again, in Isaiah chapter 58, we are told that Israel forsook the ordinances of God. Verse 13 tells them how to correct their ways and honor God, “If thou turn away thy foot from the sabbath, from doing thy pleasure on my holy day; and call the sabbath a delight, the holy of the Lord, honourable; and shalt honour him, not doing thine own ways, nor finding thine own pleasure, nor speaking thine own words: Then shalt thou delight thyself in the Lord; and I will cause thee to ride upon the high places of the earth and feed thee with the heritage of Jacob thy father: for the mouth of the Lord hath spoken it.”

There is no doubt that all flesh includes everyone, Jews (Judaean) by birth and Gentiles (nations). At the time of the new heaven and the new earth, a time when all things are made perfect, the sabbath will be universally recognized and observed.

THERE ARE SEVERE PENALTIES FOR DISOBEYING THE SABBATH COMMANDMENT.

In Jeremiah 17, the Lord says “hallow ye the Sabbath” He goes on to say “But they obeyed not, neither inclined their ear, but made their neck stiff, that they might not hear, nor receive instruction. He continues on to tell about the rewards for obeying Him and in verse 27, He warns, “But if ye will not hearken unto me to hallow the sabbath day, and not to bear a burden, even entering in at the gates of Jerusalem on the sabbath day; then will I kindle a fire in the gates thereof, and it shall devour the palaces of Jerusalem and it shall not be quenched.”

In 586 B.C. and in 70 A.D. Jerusalem was overthrown. Why? The Bible says it was because the people did not keep God’s commandments.

History reveals that all the known nations during the first century A.D. rested on the Sabbath day, Saturday. The question is not: “did the believers meet on Sunday” but rather: “what did believers do on Saturday, the Sabbath day”?

The first century historian, Flavius Josephus, gives us great insight as to what took place on the Sabbath, not only in Jerusalem, but, in all of the Roman empire.: …..the multitude of mankind itself have had a great inclination of a long time to follow our religious observances; for there is not any city of the Grecians, nor any of the barbarians, nor any nation whatsoever, whither our custom of resting on the seventh day hath not come…..

Philo, a first century historian of Alexandria Egypt, reports the same findings: “And in short, it is very nearly an universal rule, from the rising of the sun to its extreme west, that every country, and nation, and city, is alienated from the laws and customs of foreign nations and states, and that they think that they are adding to the estimation in which they hold their own laws by despising those in use among other nations. But this is not the case with our laws which Moses has given to us; for they lead after them the inhabitants of continents, and islands, the eastern nations and the western, Europe and Asia, in short, the whole inhabited world from one extremity to the other. For what man is there who does not honour that sacred seventh day, ranting in consequence a relief and relaxation from labour, for himself and for all those who are near to him, and that not to free men only, but also to slaves, and even to beast of burden.

What did the first century Gentile believers do on the Sabbath? They rested just as they always had.

It was not necessary for the church to instruct the Gentile believers as to the Sabbath. They were already observing it throughout the known world.

One of the most important considerations relates to Constantine the Great and the fact that he, as Roman Emperor, commanded the civil observance of Sunday. In the year 321 he issued a law prohibiting manual labor on Sunday.

The Sunday law of Constantine had nothing to do with Christianity.

Quoting the book “The History of the Church” we find that “He enjoined the observance, or rather forbade the public desecration of Sunday, not under the name of Sabbatum, but under its old astrological and heathen title, Dies Solis. familiar to all his subjects, so that the law was as applicable to the worshippers of Hercules, Apollo, and Mithras, as to the Christians. There is no reference whatsoever in his law either to the fourth commandment or to the resurrection of Christ.

Constantine worshipped all the gods – especially Apollo the god of the sun. He held the title Pontifex Maximus which was the title of the high priest of paganism. These and other considerations make it clear that Constantine’s form of Christianity was actually a modified version of mystery religion. – The Mystery of Iniquity that had been at work since the time of Babel.

This same system, characterized by the shrouding of truth in secrecy and the manipulation of the truth in order to achieve it’s ends, set out, in the third century, to combine paganism with Christianity. These goals were partially accomplished through the proclamation on March 7th 321 A.D. of Constantine the Great, stating:” All judges and city people and the craftsmen shall rest upon The Venerable Day of the Sun.”

Shortly after he made his sun-day proclamation, Constantine ordered his wife and eldest son murdered and had a bronze statue of himself set atop a tall column as Apollo, the sun god.

This is the man known as the first Christian Emperor.

Consider the coin minted during the reign of Constantine, after he claimed to be a Christian. On one side is the head of Constantine. On the other side is the sun god Sol Invictus with the inscription “Sol Invicto Comiti” – my companion is the invincible sun.

Is the time period from Friday sundown to Saturday sundown really the sabbath? Could it be that the days of the week have changed over time?

There is absolutely no scriptural evidence that the weekly seventh day sabbath has been set aside. At the beginning of the world God proclaimed the Sabbath to be a special time. Genesis says that He hallowed it (made it holy).

Do we then make void the law through faith? God forbid: yea, we establish the law.

So what can we definitely say about the Sabbath?

The Sabbath is to be a sign between God and his people so that they will know that he is the god that sanctifies them.

The fourth commandment has absolutely nothing to do with religious activity on any certain day. In fact, it is just the opposite, it is a day of rest, prescribed by God. We should worship God every day.

The Sabbath was established at the time of the creation of the world. It is not the Jewish Sabbath or the Christian Sabbath; it is God’s Sabbath.

The seventh day Sabbath was reconfirmed in the Ten Commandments, written in stone by the finger of God.

The penalty that was set for non observance is death.

Even after the crucifixion, the followers of Jesus observed the Sabbath. The very people who walked and talked with Jesus “rested the sabbath day according to the commandment”

No where in the Bible are we told that the Sabbath was changed to Sunday.

In Isaiah 66:22-23 we find that the Sabbath is not just a thing of the past and that in the new heavens and the new earth the sabbath will be recognized.

And in Revelation 14:12, again referring to future events, we are given a description of saints: “…they that keep the commandments of God, and have the faith of Jesus.”

Yes, Saints will remember the sabbath day to keep it holy for it is one of Gods commandments and the faith of Jesus establishes it.

“The Sabbath was made for man and not man for the sabbath.”